Early Depictions of the Chinese People and Culture in the U.S. Print Media

Cultural understanding between the United States and China has been a long and complex process. The period from the mid-nineteenth century to the early twentieth century is not only a critical era in modern Chinese history, but also a period that shaped America’s early perception of China and the Chinese people.

In this talk, Professor Wenxian Zhang will share with us his book – “China Through American Eyes: Early Depictions of the Chinese People and Culture in the U.S. Print Media”, which took him 4 years to compile.  This unique collection of images is diverse, intriguing, and carries significant historical and cultural values that could stimulate critical reflections of our present moment. 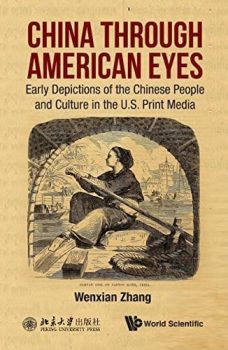 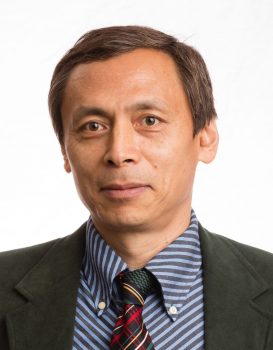 Prof. Wenxian ZHANG has been a member of Rollins College faculty since 1995. He is a recipient of the Cornell Distinguished Faculty Service Award, Arthur Vining Davis Fellow, a member of the Asian Studies Program, and a full Professor in the College of Liberal Arts in Winter Park,  Florida, USA.

His recent academic books related to China include: Huawei Goes Global: Made  in China for the World (Vol. 1) and Huawei Goes Global: Regional, Geopolitical Perspectives and Crisis Management (Vol. 2) (Palgrave Macmillan, 2020); China’s Belt and Road Initiative: Changing the Rule of Globalization (Palgrave Macmillan, 2018); China Through American Eyes: Early Depictions of the Chinese People and Culture in the US Print Media (World Scientific, 2018); China Visualized by Americans 1840-1911 (Peking University Press, 2017); The Entrepreneurial and Business Elites of China: The Chinese Returnees Who Have Shaped Modern China (Emerald, 2011); A Guide to the Top 100 Companies in China (World Scientific, 2010); and The Biographical Dictionary of New Chinese Entrepreneurs and Business Leaders (Edward Elgar, 2009).

Cultural understanding between the United States and China has been a long and complex process. The period from the mid-nineteenth century to the early twentieth century is not only a critical era in modern Chinese history, but also the peak time of illustrated news reporting in the United States. Besides images from newspapers and journals, this collection also contains pictures about China and the Chinese published in books, brochures, commercial advertisements, campaign posters, postcards, etc. Together, they have documented colourful portrayals of the Chinese and their culture by the U.S. print media and their evolution from ethnic curiosity, stereotyping, and racial prejudice to social awareness, reluctant understanding, and eventual acceptance. Since these publications represent different positions in American politics, they can help contemporary readers develop a more comprehensive understanding of major events in modern American and Chinese histories, such as the cause and effect of the Chinese Exclusion Act and the power struggles behind the development of the Open Door Policy at the turn of the twentieth century. This collection of images has essentially formed a rich visual resource that is both diverse and intriguing; and as primary source documents, they carry significant historical and cultural values that could stimulate further academic research. 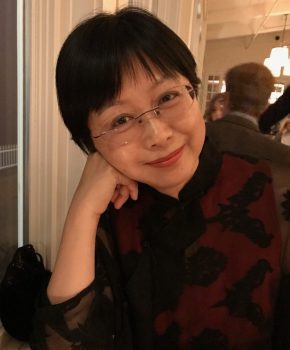 Xin Huang is an associate professor in Women’s and Gender Studies at University of Wisconsin Milwaukee. She received her Ph.D. from the University of British Columbia in Women’s and Gender Studies. Her book (SUNY Press 2018) The Gender Legacy of the Mao Era: Women’s Life Stories in Contemporary China traces the various ways the socialist gender legacy of the Mao era manifests itself in women’s lives in contemporary China.  As a translator and scholar writing about China in English, Xin Huang has also been working on Anglophone hegemony, language, translation, and feminist knowledge construction. 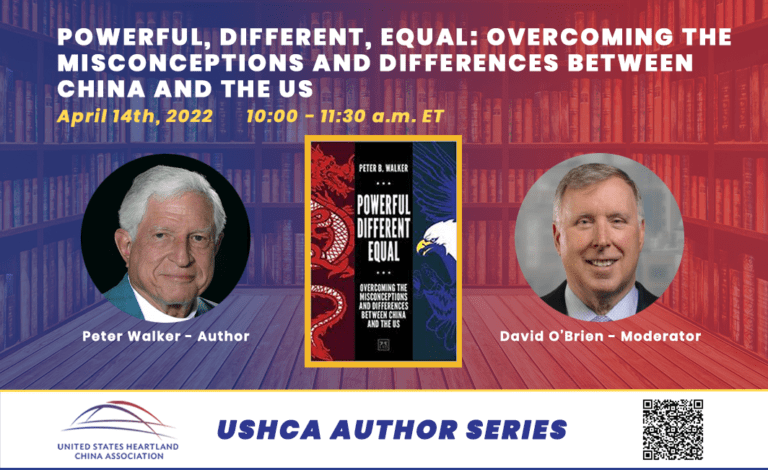 Powerful, Different, Equal: Overcoming the Misconceptions and Differences between china and the us

Powerful, Different, Equal: Overcoming the Misconceptions and Differences Between China and the US China and the US are two countries that are distinctly rooted in very different systems of governance, economic, and social issues, that play a uniquely large role 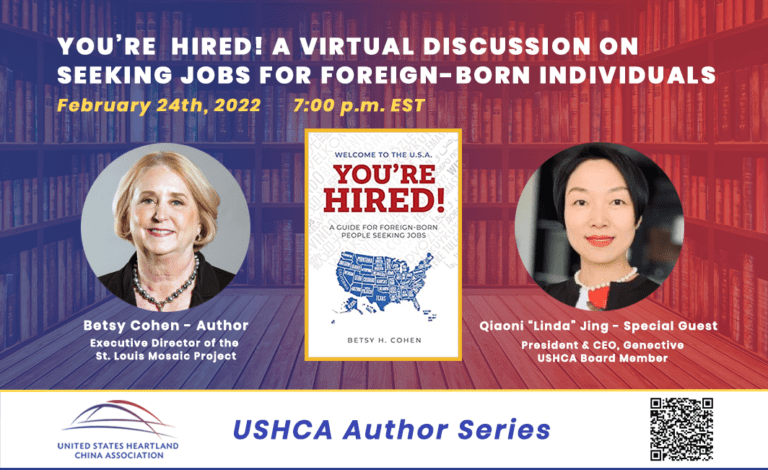 The struggle of securing employment during a pandemic is hard – especially for foreign-
born job applicants. Moreover, finding a helpful guide to navigate that process is even
harder! This special event will feature USHCA’s next spotlighted author whose book is being touted as a “tremendous asset” for foreign-born applicants seeking employment. 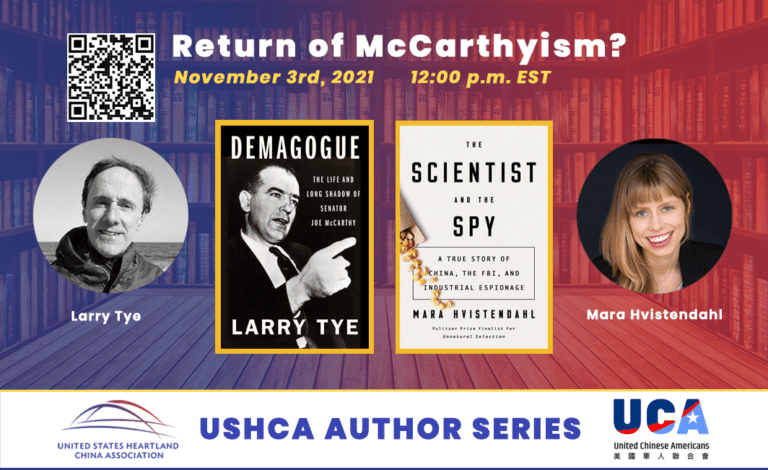 At this time of political divide in America and tension between the U.S. and China, many symbols of the Cold War era are coming to haunt us today. From the Justice Department’s much criticized China Initiative to the re-emergence of McCarthyism in America, there are alarming signs that, if we are not careful, our country may once again go down a troubling path, especially for Chinese Americans who are stuck in the middle.

What lessons can we learn from the past that can help us prevent a repeat of policies and rise of demagogues that will lead our country down a path of ruin? US Heartland China Association and our partner United Chinese Americans jointly invite two award-winning American authors to share their thoughts on this important topic. 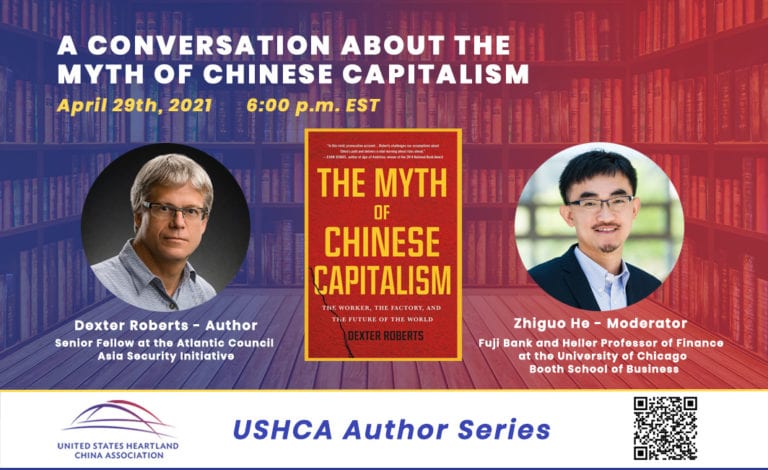 A Conversation About the Myth of Chinese Capitalism

Announcing our first USHCA author event: the award-winning journalist Dexter Roberts will discuss his  new  book  “The Myth of Chinese Capitalism: The Worker, the Factory, and the Future of the World” with guest interviewer Professor Zhiguo He from the University