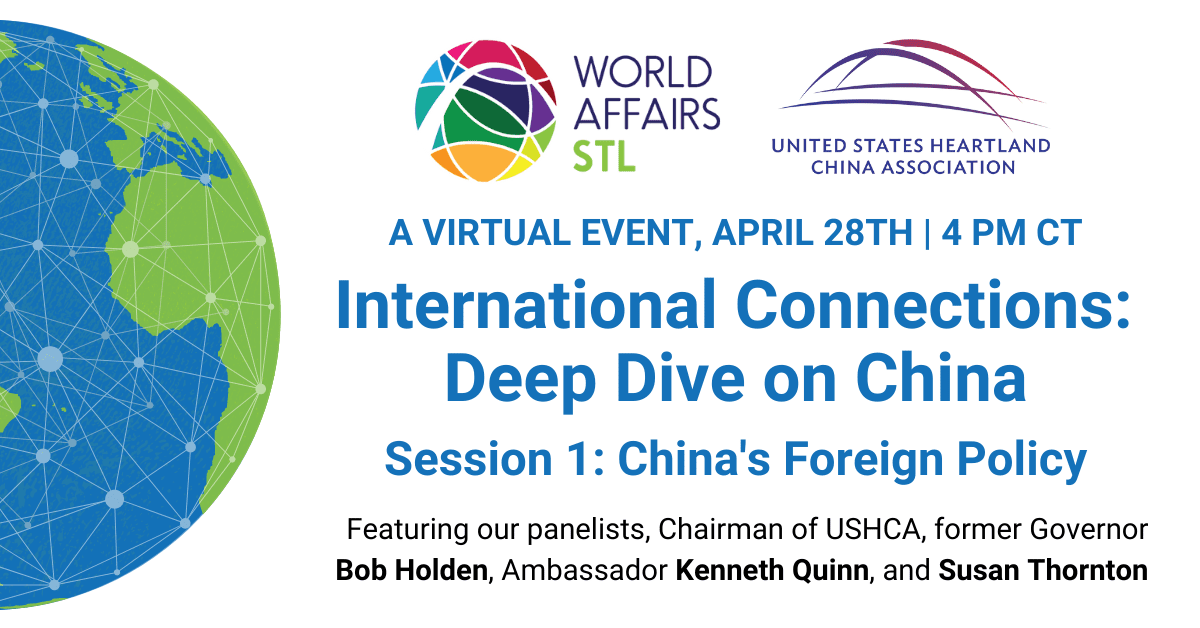 The U.S. and China share very different historical backgrounds in terms of challenges, growth, and philosophy, including very different geographical perspectives that have played a large part in each country’s trajectory. How do these historical perspectives impact the U.S. and China’s current foreign policies when engaging in international topics like the Russian invasion of Ukraine and the continuing COVID-19 crisis? This April, the USHCA will partner with the World Affairs Council of St. Louis to explore how these issues impact current foreign policy and contemporary issues between the U.S. and China. 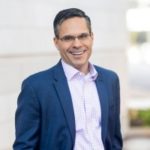 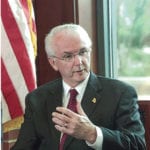 Chairman and CEO of USHCA 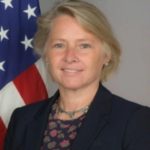 Susan A. Thornton is a retired senior U.S. diplomat with almost three decades of experience with the U.S. State Department in Eurasia and East Asia. She is currently a Senior Fellow and Visiting Lecturer in Law at the Yale Law School Paul Tsai China Center. She is also the director of the Forum on Asia-Pacific Security at the National Committee on American Foreign Policy and a nonresident senior fellow at the Brookings Institution.

Until July 2018, Thornton was Acting Assistant Secretary for East Asian and Pacific Affairs at the Department of State and led East Asia policymaking amid crises with North Korea, escalating trade tensions with China, and a fast-changing international environment. In previous State Department roles, she worked on U.S. policy toward China, Korea and the former Soviet Union and served in leadership positions at U.S. embassies in Central Asia, Russia, the Caucasus and China.

Thornton received her M.A. in International Relations from the Johns Hopkins University School of Advanced International Studies and her B.A. from Bowdoin College in Economics and Russian. She serves on several nonprofit boards and speaks Mandarin and Russian. 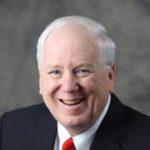 Dr. Kenneth M. Quinn, former U.S. Ambassador to the Kingdom of Cambodia, assumed the leadership of the World Food Prize Foundation on January 1, 2000, following his retirement from the State Department after a 32 year career in the Foreign Service.

Inspired by the vision of Dr. Norman E. Borlaug, the founder of the World Food Prize, Ambassador Quinn has endeavored to build this annual $250,000 award into “the Nobel Prize for Food and Agriculture.” Held each October in Des Moines on or around World Food Day (October 16), the World Food Prize Laureate Award Ceremony, “Borlaug Dialogue” international symposium and Global Youth Institute have grown in size and stature under his direction.

With the support of the John Ruan family, Dr. Quinn has led the campaign which successfully raised over $30 million to restore the historic Des Moines Public Library and transform it into the World Food Prize Dr. Norman E. Borlaug Hall of Laureates. He provided the personal leadership to have the building designed to achieve LEED Platinum certification, the highest possible level of energy efficiency and resource conservation.

During his diplomatic career, Ken Quinn served: as a Rural Development advisor in the Mekong Delta; on the National Security Council staff at the White House; as Narcotics Counselor at the U.S. Mission to the United Nations in Vienna; for four years as Chairman of the U.S. Inter-agency Task Force on POW/MIAs; and as Director of Iowa SHARES, the humanitarian campaign that sent Iowa doctors, nurses, medical supplies and food to starving Cambodian refugees.

A fluent speaker of Vietnamese, Dr. Quinn acted as interpreter for President Gerald Ford at the White House and personally negotiated the first ever entry by U.S. personnel into a Vietnamese prison to search for U.S. POW/MIAs. He was also a member of the first U.S. team to gain entry to a former Soviet prison in Russia.

Ambassador Quinn, a graduate of Loras College in Dubuque, Iowa, has a M.A. in Political Science from Marquette University and a Ph.D. in International Relations from the University of Maryland. He and his wife Le Son have three adult children.