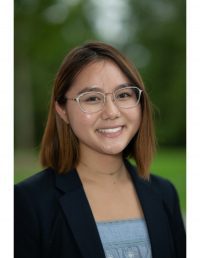 I am currently a sophomore attending Washington and Lee University (Washington and Lee or W&L). I am double majoring in Global Politics and Chinese, and I have a passion for foreign policy and U.S.-Asia affairs. Over the past few years, my interest in U.S.-China relations has grown immensely.

The first time I visited China was when I studied and interned in Shanghai during the summer of 2019. I vividly remember observing young boys buying Mao’s Red Army hats from street vendors using WeChat Pay. When commuting to and from work, I was struck by the efficiency and cleanliness of the subway and bus systems. And during my visit to Beijing, I was left in awe of the hordes of young security guards marching in unison, patrolling Tiananmen Square on its anniversary day.

My experience in China allowed me not only to improve my language skills and learn about the realm of international business but also to gain a unique perspective on the everyday lives of Chinese citizens. China’s current political and economic endeavors continue to spark my curiosity in understanding the nation’s role in the rapidly transforming world order. Though my university currently does not provide classes in East Asian politics and economics due to lack of interest, I have been working to petition for these courses and increase support for the Asian community as a whole.

Originally from Gilroy, California, I did not know what to expect when coming to Lexington, Virginia. I decided to attend Washington and Lee to get out of my comfort zone and depart from, what I call, the “California bubble.” Though I was initially disheartened by the lack of diversity and intercultural engagement, I was determined to foster a more welcoming community. For the past two years, I have been working with the dean of the Office of Diversity and the president of W&L to resolve campus inclusivity issues and organize diversity events. My main initiatives have been to ensure students of diverse backgrounds feel welcomed both in and out of the classroom and to promote greater support for Asian cultural events. This year, I expanded our Lunar New Year Celebration to incorporate more multicultural organizations, and I advocated for the first Vietnamese culture celebration on campus.

Despite Washington and Lee’s attempts to promote campus inclusivity, a prominent issue has been the large disconnect between international students and the rest of the student body. For instance, 3% of our entire student population of around 2,000 are international and only a small fraction are Chinese. This lack of representation can be amplified by the recent impacts of COVID-19 at W&L. Beginning five weeks before the university officially shut down on March 12, 2020, students’ sentiments towards the virus were widely varied. The Student Association for International Learning (SAIL) on campus were able to raise $651 in total after one week of tabling for COVID-19 relief efforts―$451 of which the organization donated to a GoFundMe started by an alumni chapter from Wuhan University and $200 to the U.S.-based nonprofit organization: Give2Asia. These successful efforts, however, also revealed dismissive attitudes among several students. On the last day of fundraising, a Chinese international student ended up in a major confrontation with a passer-by who commented, “Chinese people need to stop eating bats. At this point, they get what they deserve.”

The event caused an uproar throughout the Asian community but quickly subsided by the end of the week. Abby Yu, the president of the Pan-Asian club, stated in response, “I’m pretty nervous about the overall apathy some people have towards the virus. It’s concerning to see people who say these kinds of things receive more praise than criticism.” In Yu’s group chat for her English class, one of her classmates had posted a disturbing image about COVID-19. The meme picked fun at Chinese people spreading the virus due to their “poor hygiene.” Not until You expressed her discontent was the photo removed, and Yu’s message was left with no responses from her classmates.

“I’m pretty nervous about the overall apathy some people have towards the virus. It’s concerning to see people who say these kinds of things receive more praise than criticism.”

Other Chinese international students have also expressed their disappointment in the increasing anti-Chinese and anti-Asian discrimination appearing on campus. One student, Beverley Xia, recounted how one of her friends from Shanghai was videoed being spit at while walking down the streets of Boston. “I’m afraid of how I might be perceived on campus if I wear a mask these days. I even feel uncomfortable talking about China altogether in some of my classes.” In Xia’s Global Politics class, her professor spent a day discussing President Xi Jinping and the Belt and Road Initiative (BRI). Her professor’s descriptions of BRI as “excessive power-grabbing” and as “threatening and aggressive actions made by China” were discomforting for Xia.

Another student, Haochen Tu, also expressed her unease towards the current anti-Chinese rhetoric from COVID-19 and within U.S. politics. Tu stated, “I love Washington and Lee and being able to immerse in American culture. I grew up viewing the United States as the embodiment of power to the people and individual liberty, and it’s upsetting to see how the U.S. sees China in such a negative light. I understand people are afraid, but I also think these judgments will only hurt the future [for U.S.-China relations]. I want to stay in the U.S. to work after I graduate, but, at this rate, I’m not so sure. I don’t feel as welcomed as I did when I first came [to America] four years ago, but I really hope it gets better.”