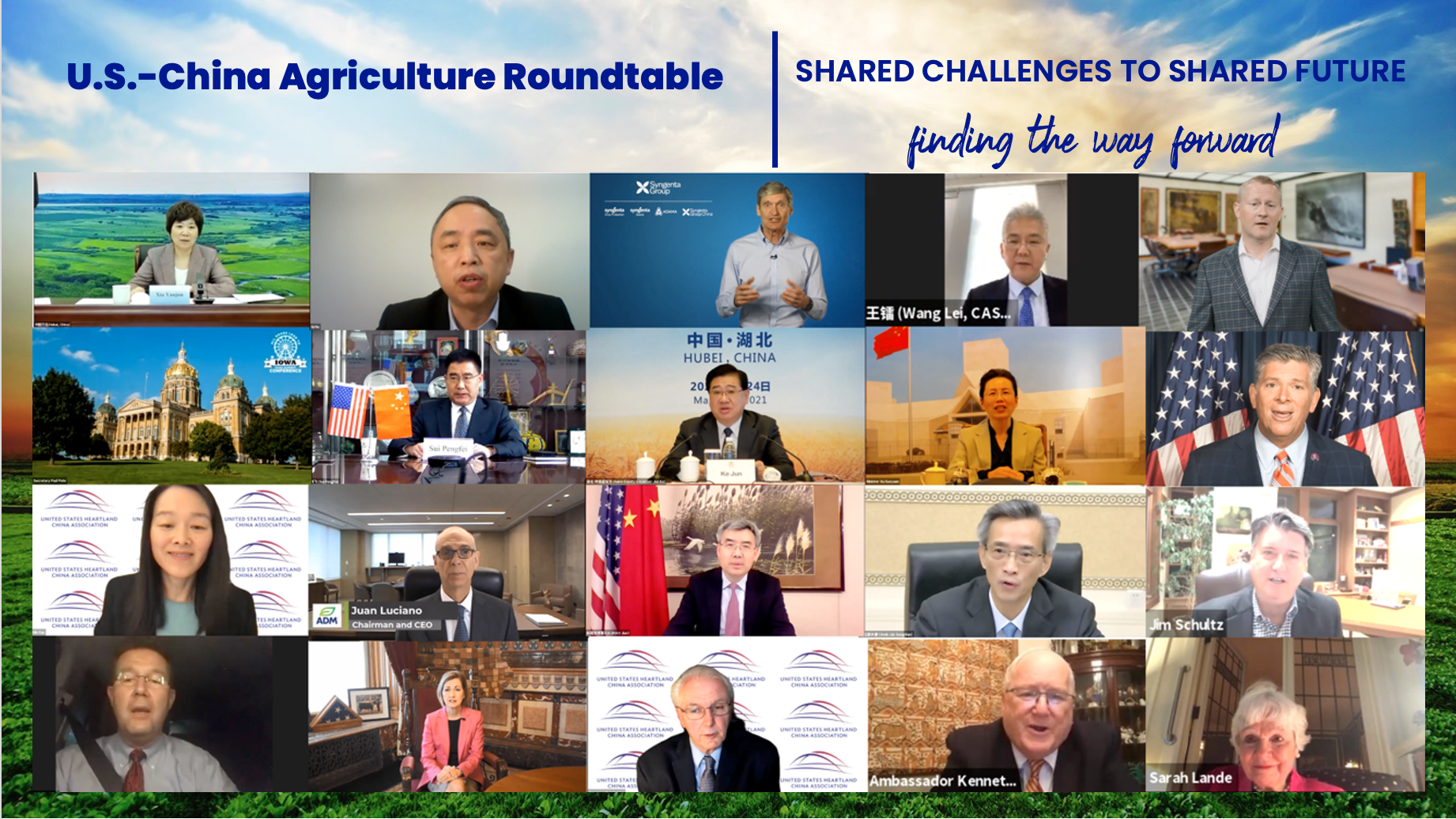 FOR IMMEDIATE RELEASE –Download a .pdf of this press release

Given the critical importance of U.S.-China collaboration in addressing global challenges in food security, climate volatility and pandemic human and animal diseases, between March 23 and April 8, the US Heartland China Association hosted a four-part virtual Agricultural Roundtable that brought together an exceptional array of American agribusiness CEOs, bipartisan government officials, commodity group executives and Land Grant and HBCU Deans with Chinese counterparts to identify “The Way Forward from Shared Challenges to a Shared Future.”

Over the course of the four virtual roundtable dialogues, which took place just weeks before a cooperative agreement on climate change was reached between the U.S. and China, leaders from the agriculture industry and academia agreed that collaborations in agriculture, especially as pertaining to climate change, are crucially important and perhaps the best path forward for close collaborations between the two largest economies of our world.

At what he calls the “most significant event in the last several years” to promote enhanced U.S.-China scientific cooperation and agricultural trade, former Governor Bob Holden, Chairman of the US Heartland China Association (USHCA) said, “I am so very pleased that leaders from across the Ag ecosystem, such as the CEOs of Syngenta, John Deere and ADM, senior officials from the soy, dairy and pork industries and senior educational leaders from Tuskegee, UC -Davis, Ohio State and Texas A&M joined us for this significant dialogue.”

On behalf of the U.S. Heartland community represented by USHCA, Governor Holden expresses his appreciation to Ambassador Lin Songtian, president of the Chinese People’s Association for Friendship with Foreign Countries, and Dr. Wang Lei, Director General of the Chinese Academy of Social Sciences for their leadership in co-organizing this Roundtable and to all Chinese participants who joined this significant dialogue.

This inaugural agriculture roundtable was dedicated to three pioneers in agriculture whose accomplishments helped shape modern agriculture and enabled farmers to feed millions of people around the world:

Kicking off the series of dialogues on March 23, Ambassador (ret.) Quinn, President Emeritus of the World Food Prize, outlined his belief that, “if the U.S. and China can find a way to work together, our world will have a better chance of addressing major global challenges.”

Governor Kim Reynolds of Iowa also called upon the gathering leaders to apply the “same ingenuity (to) move our nations beyond the immediate challenges of today to a brighter tomorrow.”

In his opening remarks, Erik Fyrwald, CEO of the Syngenta Group, expressed his optimism. “We in agriculture, supported by efforts like these dialogues, can help agriculture be a wonderful shining example of win-win bridge building between the U.S. and China.” (Link to Erik Fyrwald’s full remarks: https://www.youtube.com/watch?v=m1M-xee1aD0&t=7s)

This was echoed by the comments from Pin Ni, president of China General Chamber of Commerce U.S.A.-Chicago and Wanxiang America Corporation. “It is very difficult to reconcile the interests between the world’s largest and second largest economies,” he said. “However, we still believe it’s possible. When business interaction starts, common sense will follow and compromise can be reached.”

John C. May, Chairman and CEO of Deere and Company, also reminded the audience that, “The world’s most productive farmers, many of whom call the U.S. Heartland home, greatly benefit from open markets for the food they grow and the livestock they raise. So whether it’s the agricultural equipment being sold there, or the agricultural commodities being consumed there, China plays an important role in the health of the U.S. farmer and the U.S. Heartland.” (Link to John C. May’s full remarks: https://www.youtube.com/watch?v=Vdqhnt1AoY4&t=1s)

From the Capital, Illinois Congressman Darin LaHood echoed the sentiments of the participants, noting that there is much to be gained from a cooperative and robust relationship between the countries. “Given that the United States and China have the first and second largest economies in the world, there will always be areas of both cooperation and strain within the relationship,” LaHood said. “I support regular and continued dialogue to best meet these challenges, particularly as it relates to agriculture.”

Throughout the dialogues, far from the Beltway, a much more collaborative mood can be felt as represented by the remarks of Polly Ruhland, CEO of the United Soybean Board. “Understanding and respect regarding the cultural and social differences between our countries and our people plays a fundamental role in successful trade and recognizing shared values.”

Min Fan, Executive Director of USHCA, reflected on the significance of this inaugural U.S.-China Agriculture Roundtable. “The need for this type of constructive dialogue is evident by the outpouring of enthusiasm and support that we have received. USHCA is proud to have built a new bridge between our two nations at this icy moment, like the Ping Pong players did 50 years ago.”

The Opening Session of this four-part dialogue is available for viewing at the website of the US Heartland China Association, https://usheartlandchina.org/webinars/opening-celebration-replay/

The USHCA also wishes to thank the sponsors and partners who made the exchange possible:

The US Heartland China Association is a 501(C)3 bipartisan organization that is dedicated to building healthy ties between the heartland region of the United States and the People’s Republic of China. USHCA builds those ties through promoting exchanges in culture, education and business. More information is available at USHeartlandChina.org.