The award-winning documentary, Far East Deep South , explores the seldom-told history of Chinese immigrants living in the American South during the late 1800s to mid-1900s through the eyes of Charles Chiu and his family as they travel from California to Mississippi to find answers about his father, K.C. Lou. The film provides a window into the lives of the Chinese immigrants in the South and the discrimination they faced in the midst of segregation. The film not only highlights the struggles and perseverance of the Chinese, but explores the racial dynamics between the White, Black and Chinese communities and the added challenge of exclusionary immigration policies, such as the Chinese Exclusion Act that many families faced at that time.

USHCA organized a multi-city viewing and speaking tour to honor the stories of early Chinese American immigrants in the Heartland region, broaden awareness of their contributions as well as the discrimination they experienced alongside African Americans, and promote better understanding between our communities today.

This past October, the first leg of this tour brought free public viewing events and post-film discussions to four Heartland cities: Jackson, Vicksburg, Oxford, and Memphis. 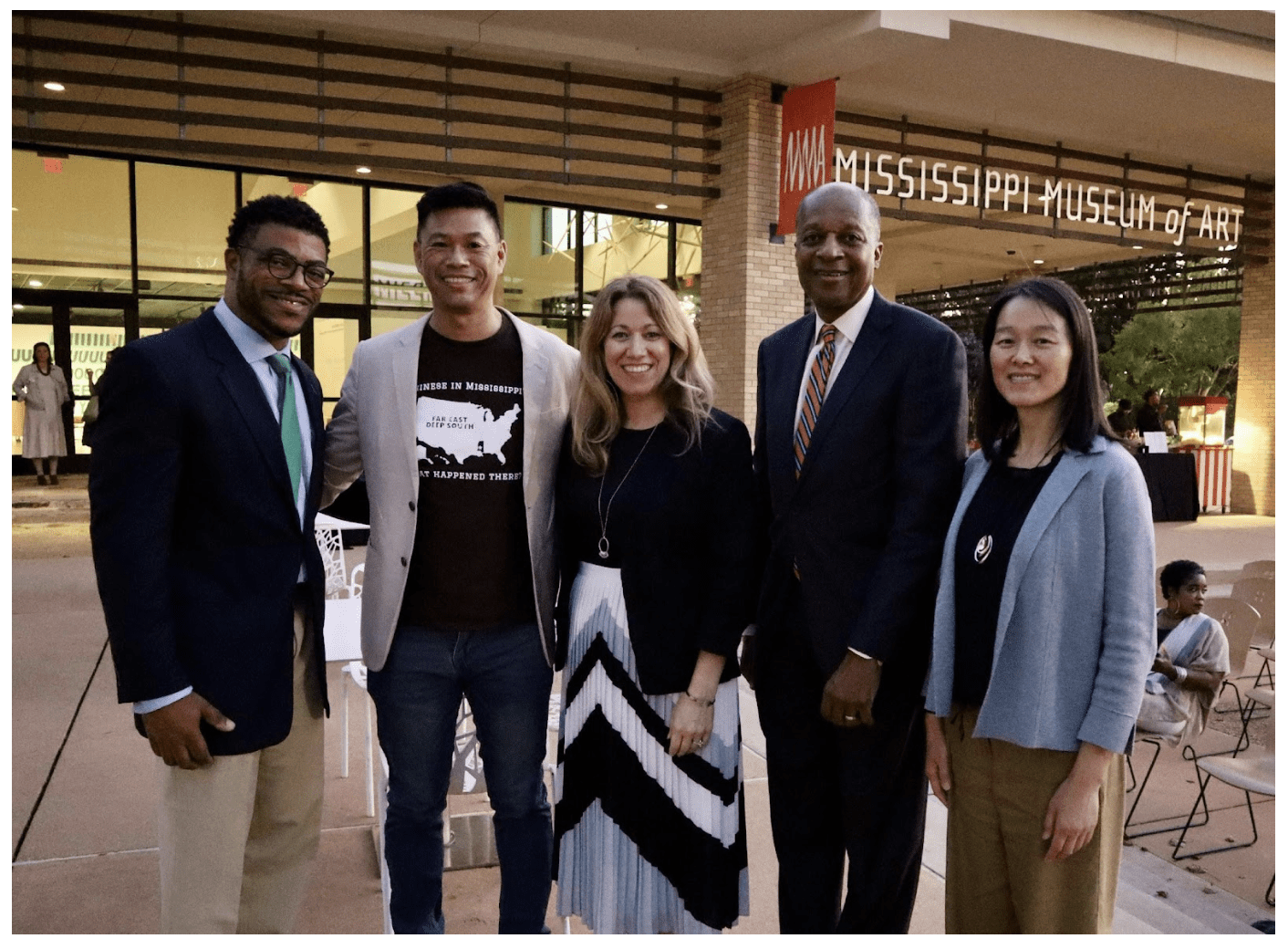 The Mississippi Museum of Art (MMA) in downtown Jackson is the largest museum in Mississippi. As a public museum, MMA is dedicated to “transforming the traditional relationship between museum and audience from one of scholar and student to that of co-investigators of cultural issues,” a mission put into practice at the Far East Deep South screening organized by USHCA and hosted by the museum at its outdoor theater. This event marked the “homecoming” of the documentary since the pandemic had canceled a previously planned showing in Mississippi after its initial release in 2020.

Prior to the event, local media outlets including Good Things with Rebecca Turner on SuperTalk FM as well as Next Stop Mississippi on MPB Think Radio helped spread the word. The following day, Baldwin Chiu, the producer of the documentary, was also interviewed by the Mississippi Public Broadcast Radio.

Right around sunset, a crowd had gathered with people coming in from near and far; some of them, like Emily Jones, the Executive Director of Delta Chinese Heritage Museum in Cleveland Mississippi, drove over two hours to attend.  She set up a mobile exhibit “Grocery Stories” to share the broader context of the Chinese community that had thrived in the delta.

Elisabeth Callihan, MMA’s Director of Education, introduced Mr. Louis Wright, Chief Administrative Officer from Mayor Lumumba’s Office, to kick off the event with welcome remarks. The audience watched the documentary as night set in around the outdoor theater.  Following the screening, Producer Baldwin Chiu was joined by Von Gordon, Executive Director of the Alluvial Collective, for an animated discussion and Q&A with the audience, who had this to say about Far East Deep South:

“The insidious nature of racism, xenophobia, and identity-based oppression is best exposed, not by data and infographics, but by the stories of other human beings — our brothers, sisters, friends, and neighbors. Far East Deep South exceptionally tells a human story, and perhaps as importantly, it tells a reflective story about what our country has been and an instructive story about what our country can be in the future.” 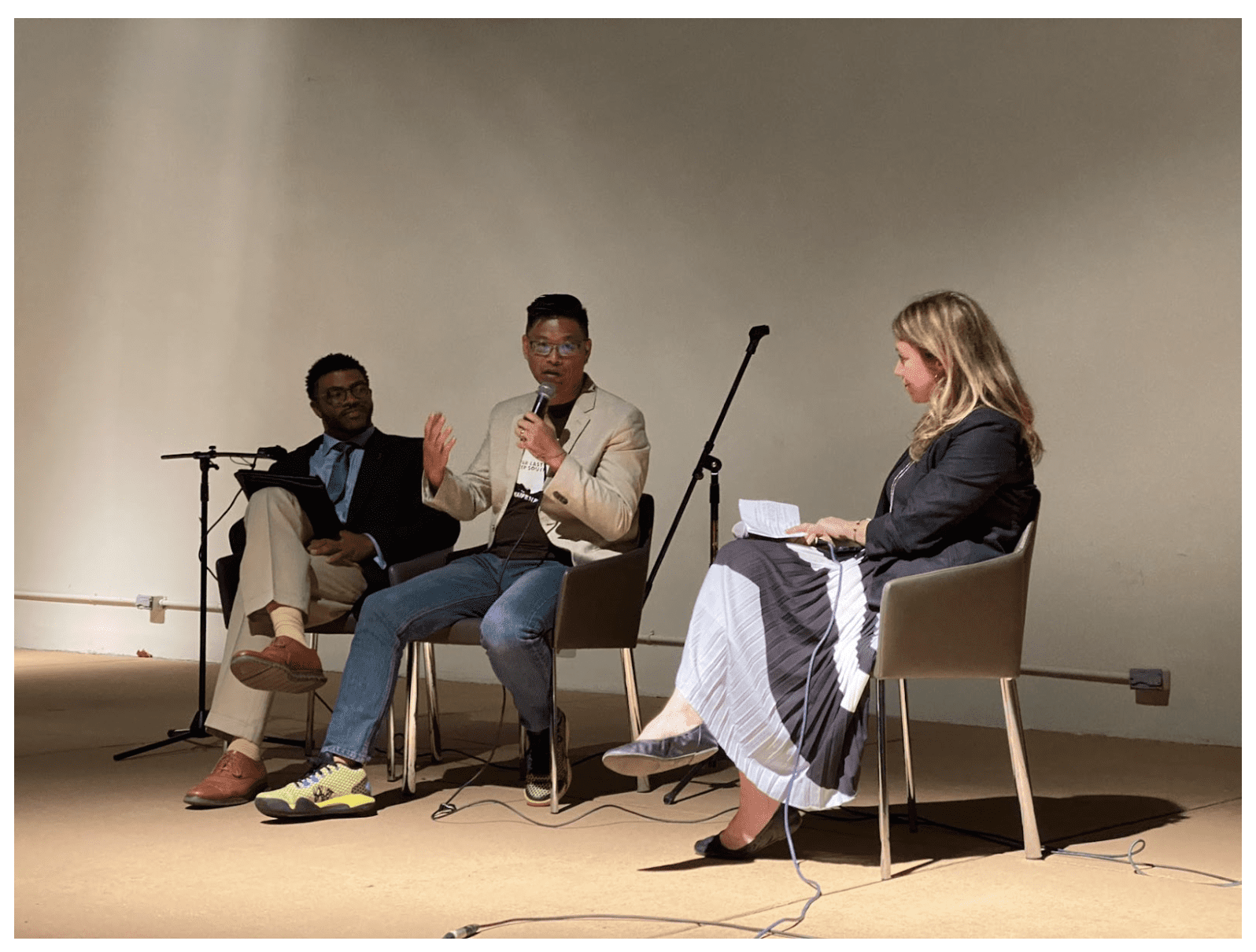 At the conclusion of the event, there was a palpable sense of pride–and a deep appreciation of Mississippi’s Chinese American heritage. Attendees were eager for further discussion, queuing up to speak to Baldwin and reaching out to USHCA staff about scheduling future screenings. 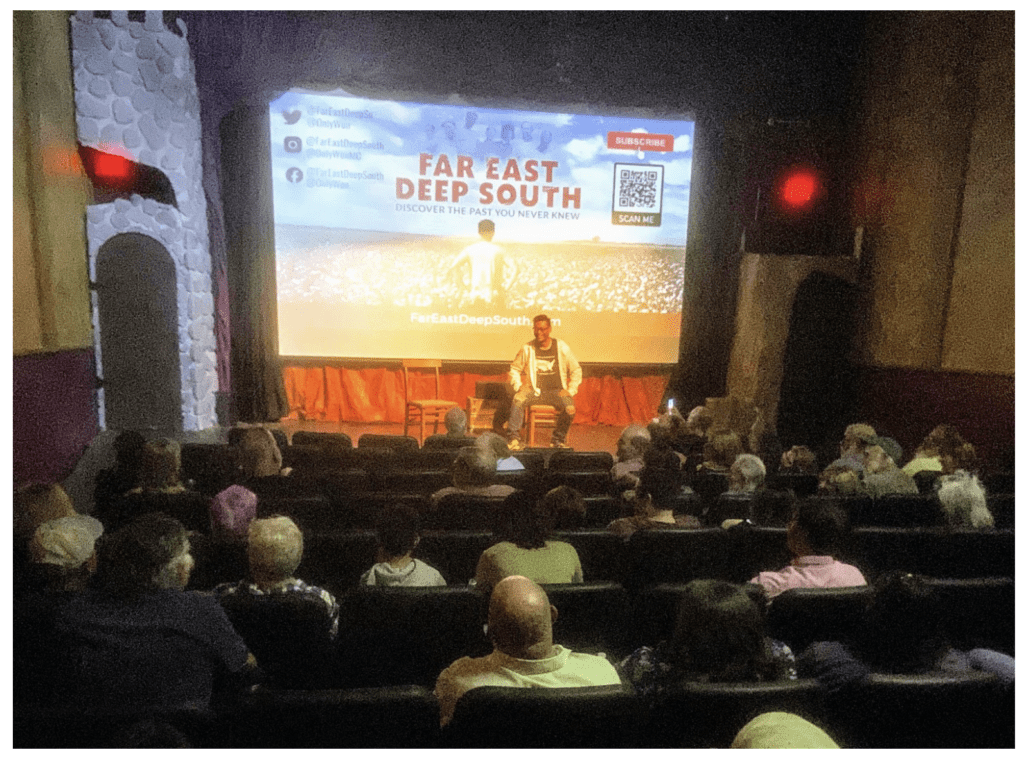 Baldwin Chiu addresses the crowd at the Far East Deep South screening in Vicksburg, MS at the Strand Theatre.

Vicksburg was the next stop for the Far East Deep South Tour. The Misississippian city of 23,000 is located right alongside the river and borders Louisiana. While this historic city is known for being the last major Confederate stronghold during the American Civil War, and for not celebrating the 4th of July until 1947 as a result of their Union defeat, the city now embraces its diversity as well as open discussions about racial reconciliation in their home state. 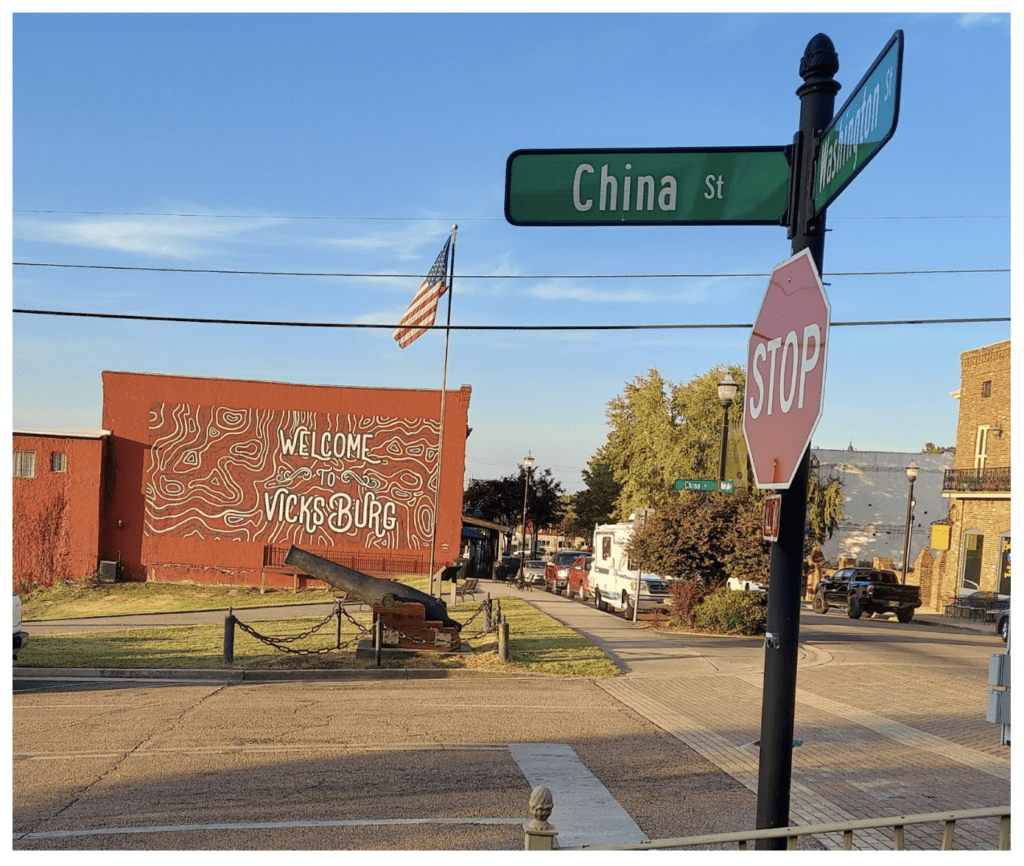 Featured above is “Welcome to Vicksburg” by Drew Landon Harris on well-known streets Washington Street and ‘China Street’ in Vicksburg, MS.

The Vicksburg showing was held at the community-supported Strand Theatre, which has a mandate to promote cultural accessibility and possess a long history in and of itself. The small theater opened in 1934 with an upper mezzanine that during Jim Crow was reserved for African Americans only. Now no longer in use, a very diverse audience turned out for the event and filled the theater.

Mr. Jamma Williams, Administrative Assistant and Constituent Services Representative for the Mayor’s office welcomed folks to the showing by underscoring the importance of coming together and discussing the unique history of their corner of Mississippi in addition to thanking the US Heartland China Association for organizing the event. Mr. Williams had this to say about the impact of Far East Deep South’s on him, personally:

“Viewing the documentary immediately made me reflect on the relationship and presence of my father… after meeting my father [recently], spending the last three months of his life with him, the birth of my son, and now being the primary caregiver of and for my son, it has been a curse and blessing. The curse being the ever so consistent absence of a father figure in children’s lives. The blessing being that of me being able to love and care for my son.”

Featured above: Baldwin Chiu (Far East Deep South) and Jamma Williams (City of Vicksburg) together in the Strand Theatre.

The discussion after the film was led by Daniel W. Boone, Director of Theater Programming for the Westside Theatre Foundation at the Strand Theater and Baldwin Chiu. The impact of Chinese grocery stores was not lost on Vicksburg either, and Daniel mentioned their establishment in the community and how they relate to Far East Deep South on their website:

“’Growing up here in Vicksburg, we were very aware of the dozens of Chinese American families who lived here,’ said Daniel Boone, film programmer for the Strand ‘They often owned and operated small neighborhood grocery stores throughout the city. We shopped in the stores, because they were convenient, and the owner’s kids were our classmates. This film tells the larger story of how all that came to be and what happened in later years. Being able to be present another Mississippi story which helps us understand the fabric of this place we call home is part of what we see as our mission as a community theater.’”

The reception from the audience was phenomenal. Personal stories from the audience of their own knowledge of Chinese American grocers in the area flooded the discussion and a very healthy discussion ensued on how far Vicksburg, the state, and the country have come racially. One local teacher who attended said she wanted to implement the film in her class to teach Asian American history.

Given Vicksburg’s deeply racial history, it was important to the organizers to have a very respectful and frank dialogue on the importance of the struggles and contributions of both Asian and African Americans through the film. The positive impact of the screening and discussion was clear, not only from the documentary’s reception, but also from efforts after the screening. The event was featured in the Vicksburg Post on October 7th as well as the Vicksburg News on October 6th.

In 2020, an earlier version of Far East Deep South was released at the Oxford Film Fest and won an award! Since then, the film has not been back to Mississippi nor shown its full, current version in the Magnolia State. Far East Deep South’s return to Oxford was thereby fitting, not only for its previous connection to the film, but also for its connection with Ole Miss.

The University of Mississippi has a long history of both racism and reconciliation; as a former Confederate hospital site, as a site of violence after admitting the university’s first African American student, James Meredith, as well as in more recent years being the launching board for the removal of Confederate statues. All that said, it also has one of the largest Chinese Flagship Programs in the country. 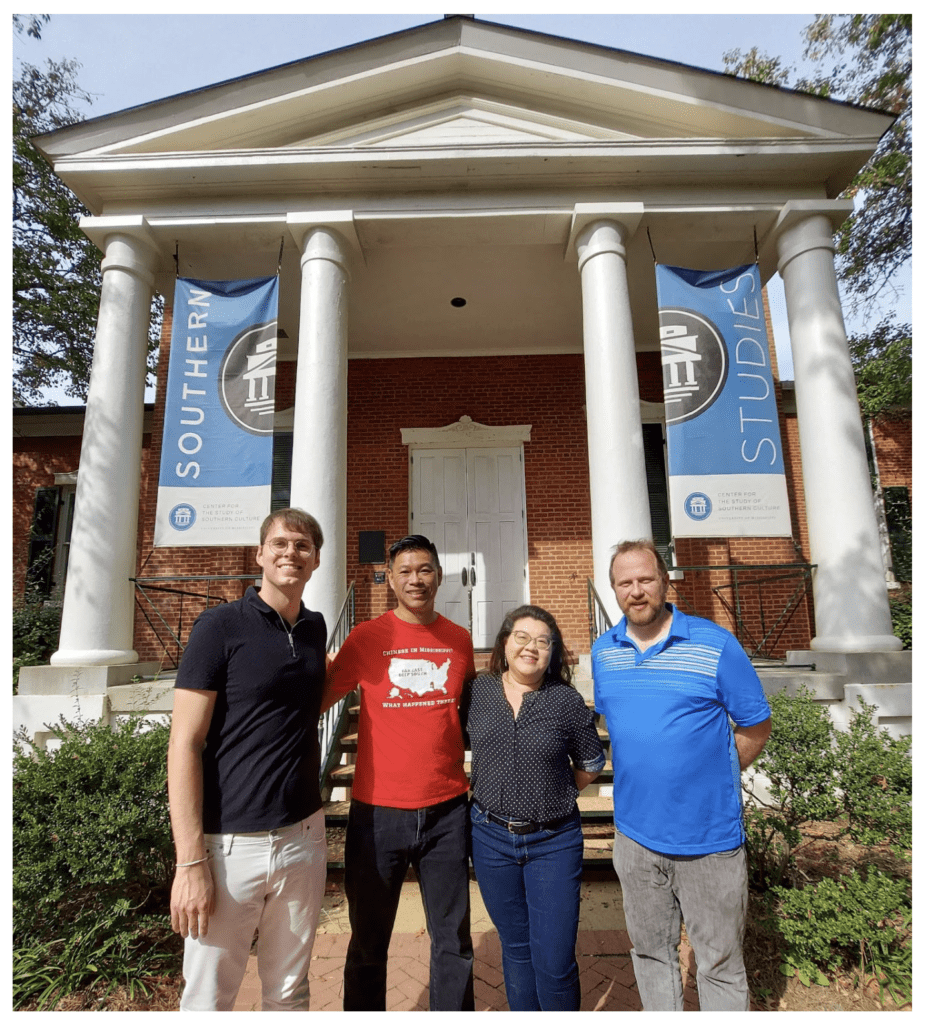 This screening and discussion featured Dr. Lynn Woo, who serves as both the Associate Director for Center for Population Studies and the State Data Center of Mississippi, and the Director of the Minor in Society and Health; Matt Wymer, Executive Director of the Oxford Film Festival; as well as Coop Cooper who was the cinematographer for Far East Deep South.

The reception for the film was very positive, being well received by the local community. An Ole Miss student and her mother, Alyssa and Linda Williams, whose Chinese grandfather had owned a grocery store in Greenville – which at one point had 40,000 residents and 50 Chinese-owned grocery stores – shared their story with the group. The screening was featured in the university newspaper, Hotty Toddy on October 14th. Pictured above is Barnard Observatory (University of Mississippi) where Far East Deep South was screened.

Memphis has a long history in the mid-South as a hub for Chinese immigration. While Chinese immigrants often lived in Black neighborhoods in the area and went to white schools in more recent years, the role of Chinese grocery stores and restaurants has always been a pillar of Chinese presence in Memphis.

The final screening of the tour took place at Christian Brothers University in Memphis, Tennessee on Monday, October 17th. Christian Brothers University is a private Roman Catholic university founded in 1871 and was the first degree-awarding institution in Memphis, now home to many international students. With one of the largest and most diverse crowds yet, students and long-residing residents of Memphis came together to watch and learn about Baldwin Chiu’s family’s story. Given that Memphis has a large Chinese immigrant and international student population, the film immediately resonated with many of the audience members. Queen Titilé Keskessa, the Community Outreach Manager from the City of Memphis Mayor’s Office (among many roles), welcomed everyone to the event. Representing the City of Memphis, she opened the event with these remarks: 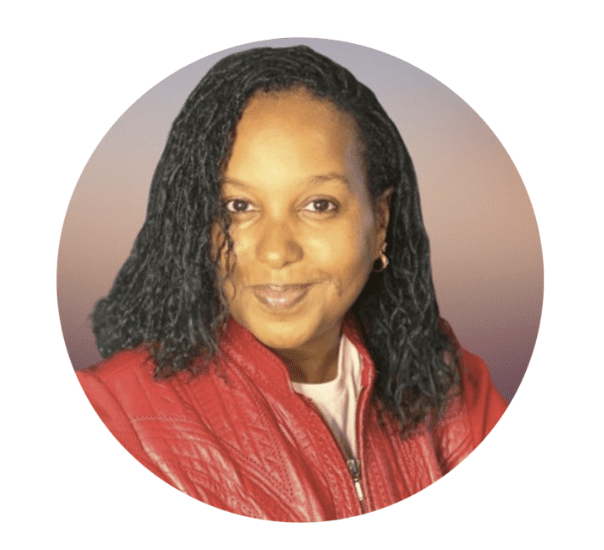 “As immigrants we all come from different parts of the world, but we now live as Memphians, the more we get to hear each other’s stories, the more Memphis will truly be the best place to live.”

Pictured above is the screening for Far East Deep South at University Theater at Christian Brothers University.

The Q&A after the screening was moderated by Jinliang Cai, Vice President of International Business Development for the Greater Memphis Chamber and President of the Chinese Historical Society of Memphis and Mid-South, joined again by Baldwin Chiu, as well as Emmi Dunn. Emmi is the Secretary at the Chinese Historical Society of Memphis and Mid-South and a key part in the film. Emmi’s father bought Baldwin’s grandfather’s store after their grandfather passed away. Answering many questions about the Chinese community in Memphis, the panel engaged with the audience and received great feedback as the last screening for the Far East Deep South Southern Tour for 2022. The screening was also featured in the Daily Memphian.

Overall, the 2022 Far East Deep South Southern Tour comes at a time of growing tension between communities in the South. We believe that bringing this film to more Heartland communities offers a unique opportunity to honor the history of early Chinese American immigrants in the South, bring to broader awareness their shared struggles and deep friendship with the African Americans in the segregated South, and help us discover more stories that promote better understanding in our communities.